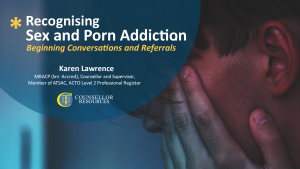 I use the World Health Organisation (WHO) definition who classify the sexual behaviours as an impulse control disorder and not an addictive disorder. Generally speaking, classification is first described as a disorder and later may become classified as a behavioural addiction such as gaming or gambling addiction.

The 4 components of Compulsive Sexual behaviour Disorder (CSBD) are: -.

1.Being pre-occupied and out of control with persistent repetitive sexual behaviour.

2.Continuing with the sexual behaviours despite harmful consequences.

3.Numerous attempts to reduce or stop the sexual behaviour despite adverse consequences or deriving little or no sexual satisfaction from it.

4.The pattern of behaviour to control intense, sexual impulses or urges resulting in repetitive sexual behaviour is manifested over a period of time – 6 months or more.

Sex addiction is not about underlying conditions.

The WHO, in defining CSBD, were keen to address one of the most common concerns that self-diagnosis would be based on a person’s evaluation of moral incongruence. Diagnosis should not be based on psychological distress caused by moral judgements or disapproval.

Moral judgements can be based on societies views of proscribed norms which are forever changing and there is constant conflict between who is responsible between the individual, family, church and government.

Morally you may disagree with certain sexual activities but if you are not not pre-occupied with it or it is out of control, then this may not be an addiction.

If your sexual activity contravenes your own values and beliefs and you feel it is harmful to you then it may be an addiction – if you are enjoying the behaviour with no remorse or regret or emptiness then it may not be an addiction.

Sex addiction is not driven by sexual desire although it may have started off that way, but it’s not about sex any more than alcohol addiction is about savouring the vintage of the wine or contemplating how the grapes were grown. If you are alcohol dependent you are drinking to drown your emotions often to the point of black out and no memory to numb your feelings.

Sex addiction can be thought about as having the opportunity to act out as well as what might be driving the sexual behaviours such as attachment and trauma issues. Gabor Mate talks generally about addiction and his belief – ‘Its not the why of the addiction – it’s the way of the emotional pain’. Sex addiction, however, is unlike any other addiction because it violates the person and very core of intimate relationships.

Some of the most common behaviours of CSBD

These include internet addition – pornography, webcam and cybersex and fetishes and visiting sex workers.

‘The Coolidge effect’ is an example of how unrelenting novelty can drive behaviour. It got its name from US president Calvin Coolidge. The story goes that he and his wife were touring a farm. The farmer proudly showed Mrs Coolidge a rooster that could copulate with hens all day long.  Mrs Coolidge coyly suggested that the famer tell that to Mr Coolidge. The farmer duly did and the president said ‘With the same hen?’ ‘No sir’ replied the farmer. ‘Tell that to Mrs Coolidge the present retorted’.

Cybersex – chat sites whether talking or messaging can be very risky, they are often monitored by the police as young people under the age of 18 may be on these sites listening or partaking. How do you know the person you are talking to or messaging is over 18 years?

Fetishes –often start around the age of 2/3 years where the child develops a special interest in for example, shoes because they are sitting on the floor beside their mum or teacher and associate shoes with comfort and familiarity and be soothed by it.  They can maintain that interest and being soothed as a child and when puberty arrives the comfort and soothing can become arousing and sexual and be misinterpreted as a sexual fetish.

Some people wonder whether they just have a high sex drive/appetite and not a sex addiction. How do you determine what’s a higher drive than normal? Do you enjoy it, do you feel its compulsive? If there is enjoyment and no ambivalence, you may not have a compulsion so may not have an addiction. Doing something a bit too much does not equal an addiction. If you are drinking a bit too much and it affects your work then you can ease back. Addiction is you try to ease back but fail. Then you have the elements of addiction.

Other people say they just have a lot of sex – there may be a lot of sex but is there a feeling of being isolated, spending more time with pornography than with people, feeling you have low mood.

Some people can blame their sexual activity on their relationship – ‘if we hadn’t of argued then I wouldn’t be acting out’.  Normally a person’s sexually acting out pre-dates their relationship – in other words the CBSD emanates from the past and the person’s psychological pain which existed before becoming a couple. In meeting with the partner, I talk about ‘The three C’s’, that is the partner did not Cause it, cannot Control it and cannot Cure it.

What stops people disclosing sex addiction is guilt and shame and often ‘character-damming labels’ which not only affects the sex addict but also their partners and families. Often people have lived with secrecy perhaps for many years and with that what has been felt as ‘unspeakable’ until now. I do not underestimate the magnitude of feeling shamed and its impact of ‘muting’ people.

In feeling such guilt and shame it’s normal to have intense self-loathing and self-hatred. When this happens, I remind them of their inherent health in that they have showed strength and resilience in seeking help. That in therapy, I am with them in providing a safe presence where they will be met, seen and not judged.

The importance of an assessment

So, in ending this month’s blog, if there are some things you recognise about yourself or someone close to you, it is important to have an assessment by someone who is knowledgeable to consider whether you genuinely have an addiction or not.

I offer an assessment process and a written formulation and if there is an addiction a treatment plan. How long that takes in working through the treatment plan is up to each individual.

This section of the web site provides guidance on the legal limitations of this site and acknowledgement of copyright belonging to other individuals and organisations.

Limitations of this site

This site is provided as is with no implied, or, other guarantee of success in counselling.

The outcome of counselling will depend on the individual and their willingness to be honest, both with themselves and with me as the counsellor.

Any information provided is done so on a best endeavour basis and no absolute guarantee is made in respect of accuracy. Any changes to pricing and, or, terms under which counselling, supervision services and training services will be provided, will be notified at the time of requesting such services.

This website complies with the UK Data Protection and EU GDPR leglisation.

The majority of text within this site remains the copyright of Relating 2 Others (relating2others.co.uk) and may not be reproduced without first obtaining my permission

Questions or Complaints Regarding Copyright

Questions and Complaints regarding any aspect of my web site and specifically, the copyright statements and acknowledgements within this section of the web site may be submitted to me via the contact form on this web site, or by direct e-mail.